Zham Auto is the premier destination to buy & sell vehicles. Sign up for a FREE now »

When the Mercedes CLS was launched it was one of the first four-door coupes on sale – offering all the best parts of the Mercedes E-Class combined with a more attractive body and sportier driving characteristics. Now the CLS has plenty of rivals including the BMW 6 Series Gran Coupe, Audi A7 Sportback, and even the much cheaper Volkswagen CC

This is the second generation of the car and the squared-off looks of the old model have been replaced by a much bolder design. The new car still gets a great range of engines, though, and can be had with a choice of two diesels and two petrols. The CLS 350 BlueTEC diesel is our pick of the range due to its mix of performance and running costs, while the CLS 63 AMG is extremely quick. All models are fun to drive and comfortable over long distances.

This is a cool car, in every sense. A bit of a lounge lizard, before the idea was hijacked by predatory Eurotrash. Which isn’t to say that the CLS is a lazy, foul-handling, land yacht. Not even a tiny bit. With its 406bhp,4.6-litre V8, the 500 in particular has the necessary firepower to worry a supercar in terms of handling and performance. This engine really is a bit of a masterpiece: sonorous, smooth and effortlessly powerful. There’ll be a bi-turbo, 537bhp 5.5-litre V8 AMG CLS any day now too, which promises to be cosmically fast. But the fact is that the really clever stuff is happening elsewhere in the range, including an upcoming four-cylinder diesel (55mpg!) and a slightly gruff but super-efficient six-pot petrol. The smart money, though, is on the six-cylinder, 3.0-litre turbo diesel, more of which in a moment.

For those wanting a prestige badge the CLS remains uniquely appealing. So tame is this refresh, it is unlikely to attract any additional customers, the flip side that it is unlikely to put anyone off either.What Mercedes are hoping though, is that it will see the CLS through the next couple of years, when it will stay in production beyond the current E-Class on which it is based. In this last respect perhaps, we feel that time will show, that Mercedes revisions could have gone a little further.

View the Mercedes CLS350 Gallery below 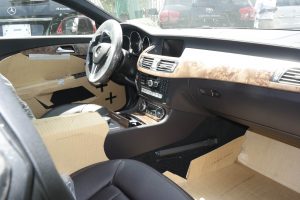 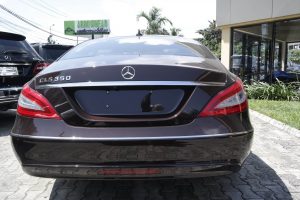 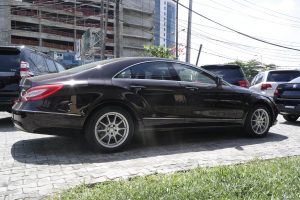